For the First Time in Belarus: NEKLO Presents iBeacon at the FSP 2015

On July 25th a grand summer event took place in Minsk – the third annual art-picnic Freaky Summer Party. The organizers managed to do a surprising thing: there were so many cheerful, creative and open to communication people in one place that is not frequently seen in the Belarusian capital – about 8000 people attended the festival. 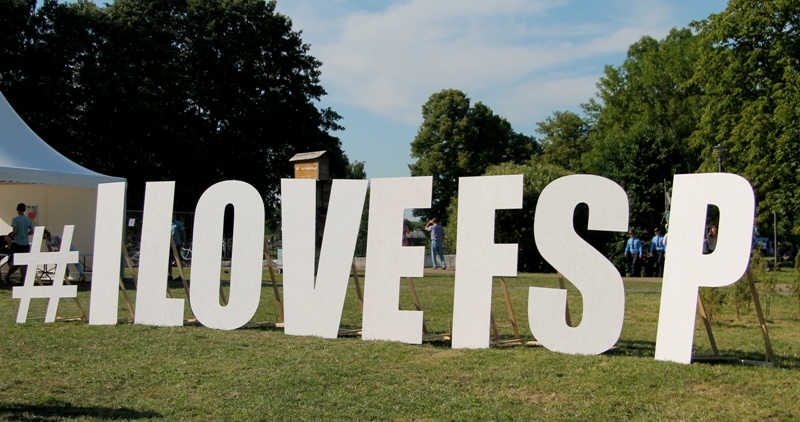 Throughout the day, starting at noon, on the island of Lake Komsomolskoye there worked educational and entertainment spots, various master classes and giveaways were run.Minsk residents and visitors were actively taking part in discussions in an edutainment zone, trying a hand at surfing and bumper ball, competing in launching paper aeroplanes, dancing to the hot rhythms of samba and tasting delicious city food.Altogether there were more than 40 partners and sponsor theme stands presented at the FSP 2015. And while the majority of the art-picnic visitors were listening to the talks of famous bloggers, wandering about the fashion market or enjoying DJs performances resting in comfortable chaise-lounges, beanbag chairs and haystacks beside the stages, the most reckless were joyfully throwing Holi paint at each other.The culminating point of the festival was the performance of the young Tom Tukker from Amsterdam, whose melodic compositions and a sincere vocal charmed the audience from the very first notes onwards, having perfectly complemented the unspeakable atmosphere of that July evening.In such a variety of events, it seems to be simply impossible to keep track of all the activities and do not miss the fun, but the organizers have thought everything ahead.Especially for the guests of the FSP our NEKLO company, being one of the partners of the event, prepared a special surprise – we have integrated iBeacon support into the official mobile application of the event.Thanks to this innovation and the iBeacon devices placed near the scenes, the Freaky Summer Party turned out to be not only the main festival of the summer but also the most interactive one. Now any visitor using his smartphone was aware of the spot he was close to, the events taking place there at the moment and what was there to expect on the island in the near future. So, getting close to one of the four scenes, the app users received a notification indicating which of the musicians was performing there at that particular moment.In order to motivate the visitors to use the iBeacon technology, we organized a special quest: there were 8 secret iBeacon devices hidden on the FSP island.  Those who found them all got prizes from the event organizers: tickets for an after-party and a slinky, a symbol of a festival.After all the prizes have been given away these colourful springs were now and then seen in a crowd near the stages.In total there were 2618 smartphone users who tried iBeacon. It is interesting to note here that 2056 of them were iOS users. Thus, the statistics proved the Freaky Summer Party to be highly popular with the most advanced users who stick to the latest tendencies, both in technology and style.

The FSP 2015 was the first event of such magnitude in Belarus, where the iBeacon technology was used. And judging by the numerous reviews of the FSP visitors, the main technological feature of the festival was among the things they enjoyed about the event.

ECOMMERCE
How To Upsell In 2022? Cross-Selling & Upselling Techniques
We step into a shoe store and pick up a pair of running shoes. A salesperson approaches and fields our questions nicely. But then in a clever move, she subtly suggests buying a slightly higher-priced pair of shoes and explains why those are better for runners. If the salesperson did their job well and if…